Tired of feeling like no one gets excited when you talk or write about your work?
Grab my free mini-course: 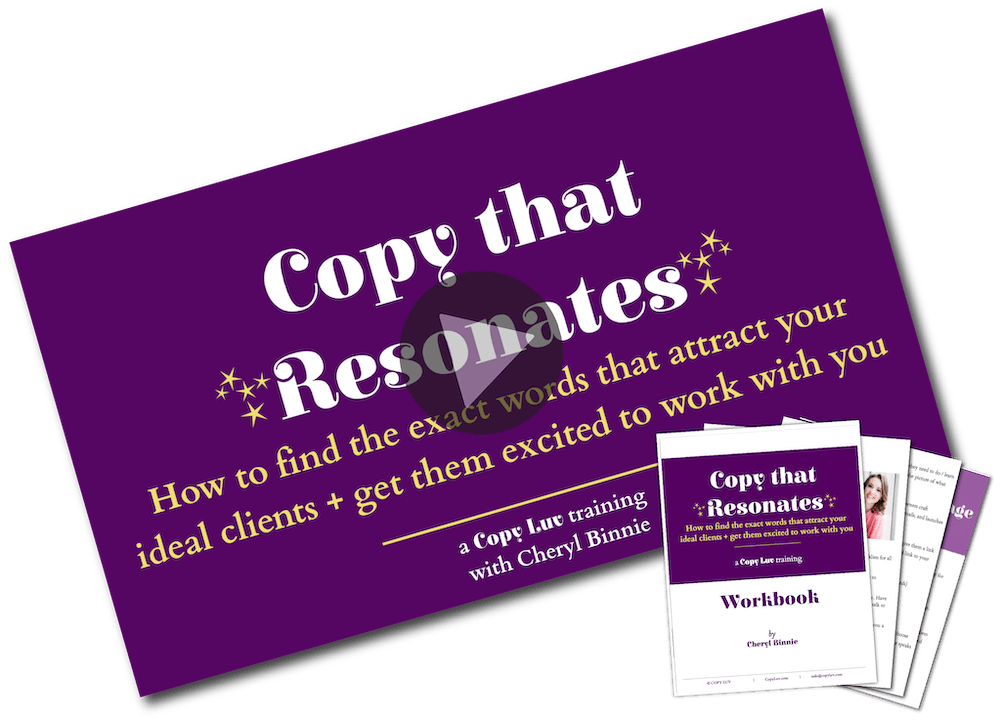 Copy that Resonates:
How to find the exact words that attract your ideal clients
+ get them excited to work with you
by Cheryl Binnie

You know those times when you have a plan…

…and it’s a pretty darn good one…

…and then it all just goes KABLOOIE!…

…and your most intelligent first thought is, “Wait. What?”

I had one of those last Thursday.

The technology I was using to host my “How to Work with A Copywriter” webinar stopped working due to a surprise update in Google Hangouts.

No control over the features, like enabling chat, that would’ve let me tell everyone what happened.

No way to change the big screen that said, “The Webinar will be Starting Soon.”

So I sent out an email, letting the registrants know the class would have to take place on a different day.

But people still showed up.
I could see the names of the attendees in my dashboard.
And I had no way to tell them that the “Starting Soon” screen wasn’t actually gonna change anytime soon…

…Until I realized that I had the phone numbers of those attendees.

Now, if you’ve ever had a business coach or have taken any kind of business training, you’ve probably been told, “Pick up the phone and call people.”

And I’m sure some people are really, really good at that.

They can just call someone out of the blue, without an appointment, and without any assurance that the other person actually wants to hear from them.

I am not one of those people.

Sure, I know plenty of people who like talking on the phone…

In fact, I got a random call from a business connection the other day. And it was lovely.  And I was glad he called.

And one of my favorite parts of my work is connecting with people via phone, so wouldn’t it make sense that other people enjoy those connections, too?

Give me an appointment, or a scheduled call where both parties know it’s coming, and I’m golden.

But as soon as I have a reason to call someone unexpectedly, I develop the sudden (and very strong) belief that no one – not one single person in the history of the world – would want to talk to me on the phone.

I come up with a million reasons why it would be better for me to email them instead..

(Okay, I might not have had that exact thought. But the emotions are there.)

Here I was, watching the minutes tick by as my attendees waited for me to start a webinar that wasn’t going to happen.

And I had their phone numbers.

And they were waiting to hear from me, anyway.

Sure, totally different medium. And in the webinar, they didn’t have to be an active participant.

But still. They were there to listen to what I had to say. And if I didn’t call them, who knows how long they would have waited?

So I picked up the phone and called them, one-­by-­one.

And it wasn’t painful.
It wasn’t awkward.
It wasn’t the end of the world.

In fact, it was lovely.

I was able to thank them for tuning in.

We laughed and commiserated over untimely tech failures.

In short – it was fun and easy and resulted in a much more personal connection than the webinar ever could have given.

So maybe… next time I have an opportunity to call someone out of the blue… maybe I’ll give it a shot.

Are you one of those people who have no problem calling someone unplanned?

Or do you still think you’d rather eat some fish from last July than make a cold call? (Or even a lukewarm call?)

Or have any other “irrational” fears around doing a specific task in your business?

Lemme know!
I love stories.
Stories are a huge part of what I do.

So tell me all about it at cheryl@copyluv.com

(And even if reaching out to someone to share your personal stories is one of your fears, give it a go. My inbox is a safe space to push your limits.)